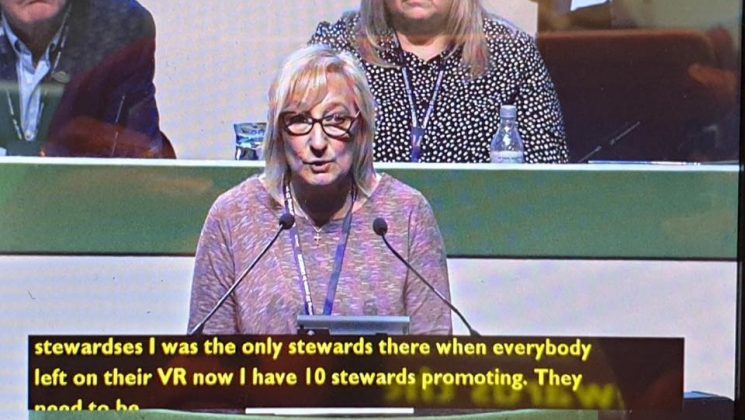 Ever wondered what goes on at the Conferences? Well, here we have some reports from some of  those officers who attended.

I was proud to be elected to represent Birmingham Branch at conference in Liverpool.  The week was very tiring but interesting and enjoyable. It is good to get involved in the wider issues of our Union.

I spoke in support of Composite E at Local Government Conference – Schools Funding and School Support Staff.   I was ‘point of ordered’ on motion 32 – Knife Crime and cuts to youth services so didn’t get to make the speech.  However I re-wrote it and used it to support Motion 48  at NDC – Gun and Knife Crime, time to stop the senseless killing.  It was good to share the issues that support staff face in Birmingham Schools.  I also had speeches ready for motion 31 – Supporting members with caring responsibilities and Emergency Motion 2 – Defend LGBT Inclusive Education but unfortunately these two didn’t get on the agenda.  I was disappointed about EM2 as one of our own schools is currently involved in an issue over inclusive education and are facing protests from parent groups.

I was invited to speak at a fringe meeting on Violence at Work.  I told delegates about the many issues faced by school support staff.

As a teller for NDC I participated in the excitement of counting card votes, there were two during NDC and it’s an important job.

We listened to several guest speakers, watched videos and had lots of interesting and sometimes emotional debates.  There was a good variety of fringe meetings and events.

The highlight of the week for me is always the Love Music Hate Racism gig.  The band Kioko, who are tipped to be the UB40 for the next generation are from Birmingham and were brilliant, the disco afterwards was also very good and I danced my feet off!

I particularly enjoy meeting delegates from around the country and sharing our experiences.  Through conference I have many colleagues and have made many friends from all over the UK.

It was unfortunate that our delegation had been split over a walkway within the hall. This made it difficult at times to discuss motions whilst in the hall.

Interesting advice given on submitting motions.  If any branch is unsure on whether their motion will be ruled out of order then we can always get advice to begin with from the committee.

The President is raising money for all school children to receive a breakfast and a maternity clinic in Malawi.

Composite A – Menopause in the workplace: This was raised as a health and safety issue and that men in the workplace need to be made aware to take away the stigma that women face.

A new data base system is being piloted which is web based.  At a cost to each branch who decide to eventually use it. This should make case admin a lot easier and accessible.

Lighthouse financial services are happy to visit any workplace or branch to set up a pop up advice shop for members.

There was a speaker from Zimbabwe congress of trade unions, Barbara Tanyanyiwa, who made an emotional speech about how women are beaten, raped and had live ammunition fired at them for protesting.

There was some opposition to an amendment to motion 17, Suicide training for stewards.  The NEC wanted to amend the motion to state that stewards should receive mental health training.  Our branch delegate opposed this, however we supported the original motion.

The branch delegates discussed the reprioritisation list.  We voted on motions 111, Energy climate change and 102 The trade union response to fascism.

On Motion 43, Violence and aggression, we listened to how workers, such as Library workers, are threatened and physically abused.  The motion asks to campaign for greater legal protection, to lobby parliament and for UNISON to provide guidance.

I attended a fringe meeting on mental health in the workplace and there was speakers from Shaw trust and Touchstone both mental health charities. Resources are available from both charities via their websites. There is also a government handbook called ‘Thriving at work’. It is a review of mental health and employers.

Rule change 12-18 which were submitted by several Welsh branches were all voted against by conference. These were rule changes to the current elections of branch stewards, officers and chair.

A bucket collection for the charities ‘Truth about Zain’ a charity set up for an enquiry into the unexplained death of a 7 year old boy www.truthaboutzane.com  ‘forget me not’ child’s hospice www.forgetmenotchild.co.uk  and ‘Love Jasmin’  a charity set up to support families who have lost a child www.lovejasmine.org.uk.  This raised over a thousand pounds and the collection was split equally over the charities.

Speaker Sonia Bassey MBE, one of the founding members of Mandela8 (UNISON member) told us about her memorial fund that is planning a memorial garden to commemorate Nelson Mandela’s release from prison. She talked about the influence that Mandela had in Liverpool and how he was a role model for the people of Liverpool particularly in the area Liverpool 8.

After a tiring week attending conference, it makes you feel proud to part of UNISON.  I attended the Stand up to Racism social evening. This was a well attended event and was really great to be able to relax and socialise with fellow delegates.

My children also used the Crèche and had a fantastic experience also. I am grateful to UNISON that this was provided as I wouldn’t have been able to attend conference otherwise.

The speech by David Prentis General Secretary on the first day did set a positive tone. Solidarity was his theme, both at home and internationally. He finished his speech by proclaiming that UNISON was not only the largest union in the UK but had the largest number number of official strikes last year, 22 in all. As he read out a list of strikers involved each one was applauded, rising to a crescendo when he finished with our own Birmingham Homecare strikers. Flag waving representatives of the strikers paraded in front of the conference as “You’ll Never Walk Alone’’ was played, a rousing, quite emotional end to a speech that bought the whole conference floor to their feet.

In fact our strike was referenced many times during the conference, as delegates from different branches mentioned it as inspiring them. Important motions, on Social Care, the Gender Pay Gap, The Windrush Generation, Universal Credit, Free TV licenses for over 75’s, Pensions, were all carried.

Several members of our branch spoke, Homecarer Mandy Buckley spoke twice at the Local Government Conference, once on Social Care and secondly on building union organisation. Schools convenor Carol Garfield some on School funding at Local Government Conference and then again on Knife Crime at the main conference. Young Member Nicola Moran also spoke at Conference, the end of which saw her take up a place on the newly elected National Executive, where she will be joined by Branch Secretary Caroline Johnson.

Throughout the week those speakers who talked about the resistance to austerity and related it to both the need for national action and a desire for a Corbyn led Labour Government best reflected the mood of a conference that applauded those who took action, but fell short of debating any motions that committed the union to it.

If you would like to attend Conference next year , please let us know.

Birmingham Branch delegates have been speaking at the recent Local Government Conference in Liverpool. Mandy Buckley (Women’s Officer – photo above) speaking on Public Service Champions. Mandy has been involved with the long running Home Carers dispute which has recently been won.

She told the hall: “we had our victory … but if the carers did not stand together, we would probably not be here today.

Care workers took to the stage for a round of applause. 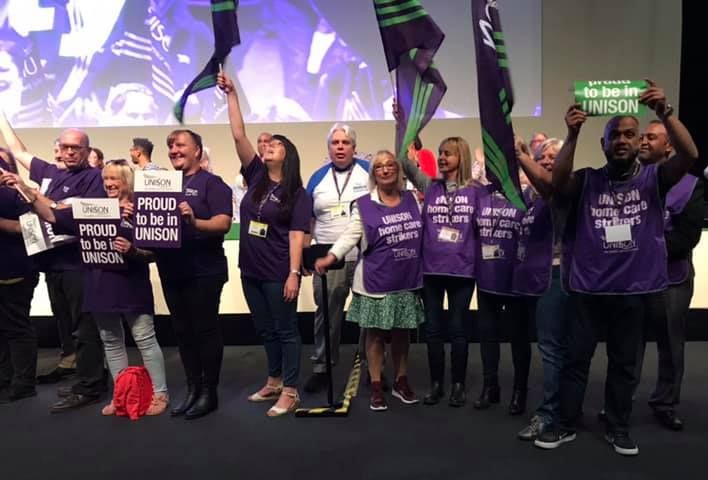 Carol Garfield (Assistant Branch Secretary – Schools) was speaking on cuts to school funding, something we have been campaigning against. 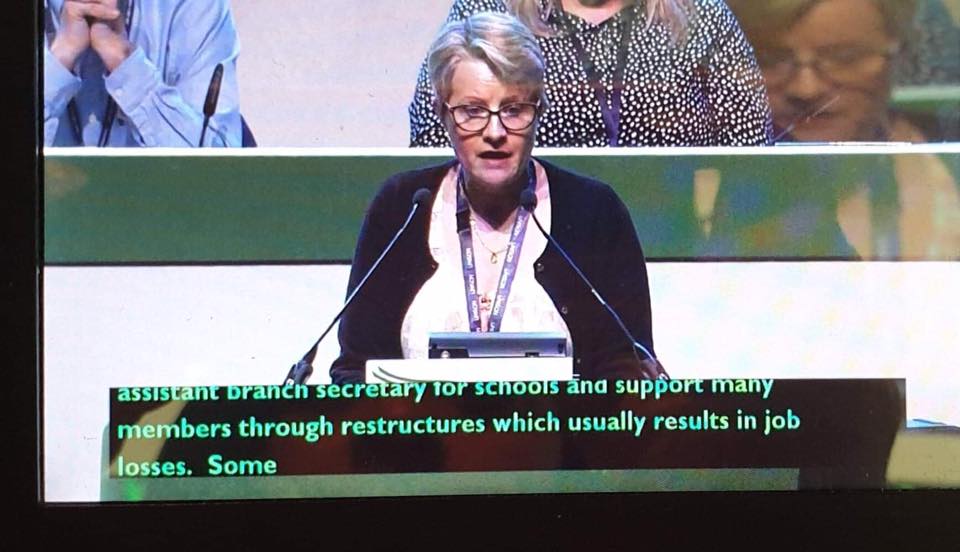