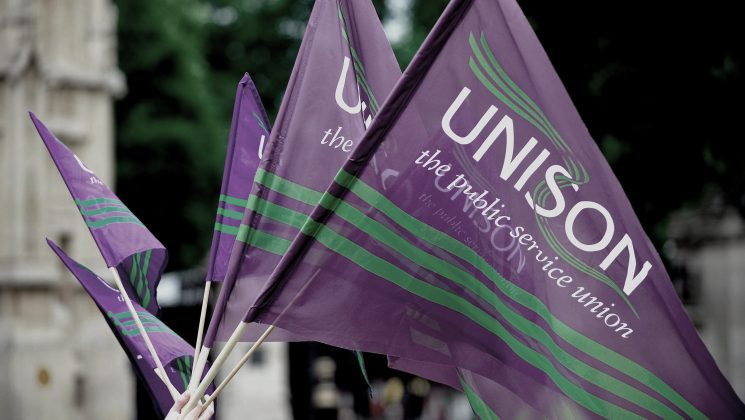 UNISON, GMB and Unite today lodged the following pay claim for all council and school workers employed on NJC pay in England, Wales and Northern Ireland:

The claim is attached and has been submitted to the Local Government Association.

Context of our claim

 Local Government has endured central government funding cuts of nearly 50% since 2010  1 in 3 councils fear they will run out of funding to provide statutory, legal duties by 2022/23  Central government says that austerity is over – and all political parties now agree public services need greater investment.  Two thirds of the public want the government to increase spending on public services

 Across the UK, an estimated 876,000 jobs have been lost in local government since June 2010 – a reduction of 30%  Local government has arguably been hit by more severe job losses than any other part of the public sector  There has been no decrease in the statutory functions of local authorities – with many of these services seeing a significant increase in demand
3
Recruitment and retention

 As of 2017/18, 78% of councils are experiencing recruitment and retention difficulties  Local authorities’ reported average vacancy rate of 8% is significantly higher than the averages for wider public sector and in the economy as a whole  Councils spent £335 million on agency social workers in 2017/18.

 A survey of over 21,000 UNISON members found that 83% say that budget cuts in the past two years have had an impact on their ability to do their job  89% said that budget cuts have had a negative impact on staff morale and 54% said their workload is unmanageable  A Unite survey found that only 11% of members rated morale as good or excellent in their workplace, with over 50% rating it as bad or terrible

 Cuts to real pay, terms and conditions, and employment totals by NJC employers have had a disproportionate impact on workers who share protected characteristics as defined by the Equality Act

 Local government workers have delivered efficiency savings year-on-year against immense pressure  New money is needed to fund this claim. It cannot and must not be funded by local attacks on locally determined conditions  Paying local government staff properly is an investment in both local services and the local economy  The Trade Union Side notes that the LGA’s engagement with us on collective bargaining has deteriorated in recent years. We expect the LGA to enter into meaningful negotiations with us on the claim in keeping with the Labour Relations (Public Service) Convention 1978 (No 15.)

For more in depth detail please download the following:NJC_Pay_Claim_2020_FINAL_24_July 2019