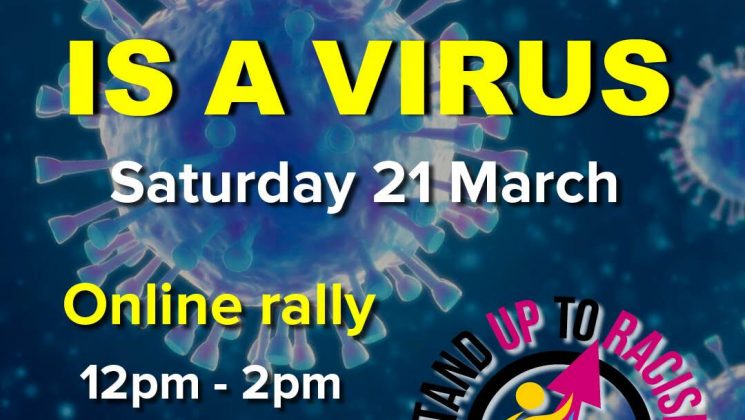 Join the #WorldAgainstRacism Online Rally for UN Anti Racism Day this Sat, 21st March, tune in 12 to 2pm, which will hear from key international speakers, alongside prominent anti racists from Britain, involved in tackling racism and the far-right.

There will be online anti racist video messages from MPs, trade unionists, faith groups and campaigners on the day. Showing solidarity with the fight against racism today and marking the 60th anniversary of the Sharpeville Massacre.

Demonstrations were set to take place across the world on Saturday but the virus crisis meant that the anti-racist movement, unlike our government, moved early to postpone our events.

Now to replace the street protests we have an exciting online gathering with speakers from across the world and leading figures from our own movement.

The coronavirus crisis is raising massive questions about the society we live in.

Donald Trump’s attempt to brand the virus a ‘Chinese virus’ shows the scapegoating and racism at the heart of our the systems.

Instead of uniting people against the threat of the virus, Trump and his like want to divide us.

Hungary’s racist leader Viktor Orbán blames migration and ‘foreigners’ for the disease. Across the world the racist right is reacting in similar ways.

It’s this kind of racist rhetoric that has led to a spike in racist attacks and spreads fear.

We need unity in the face of these threats, but already in Britain planned draconian legislation is set to target BAME communities. Johnson’s government has failed miserably to deal with scapegoating and racism in this crisis.

The report into the Windrush scandal shows the racism at the heart of the Tory government and its hostile environment for migrants.

This Saturday 21st March is UN anti-racism day. It’s 60 years since the apartheid government in South Africa gunned down people struggling for freedom.