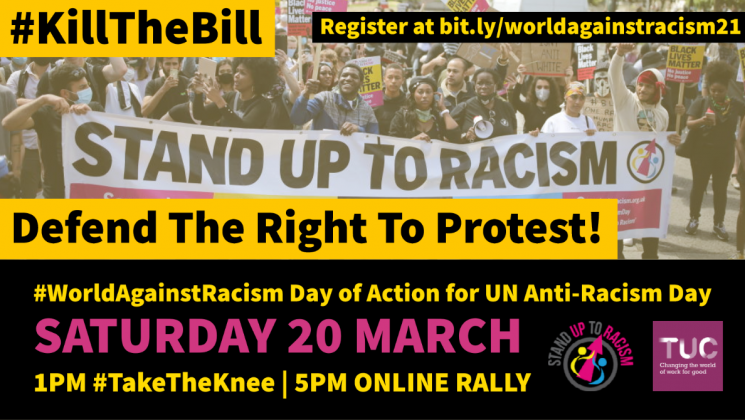 The #WorldAgainstRacism international day of action this Saturday 20 March comes in the wake of the shocking events of the last few days that have again highlighted the discrimination and inequality at the heart of our society.

The police response to the Clapham Common vigil for Sarah Everard – and now the new policing bill –  are signs that the government is using the Covid19 crisis to attack the right to peaceful protest.

The threat, in the bill, of 10 years in prison for pulling down a statue is clearly aimed at the #BlackLivesMatter movement. Environmental campaigners, trade unions and the Gypsy Roma Traveller community are also targeted.

We’ll be adding the #KillTheBill hashtag to our Twitter storm 1pm to 2pm on Saturday alongside #WorldAgainstRacism & #TakeTheKnee, and we’ll be raising defence of the right to protest as a central part of our online #WorldAgainstRacism rally hosted by the TUC and Stand Up To Racism at 5pm.

1PM – #TakeTheKnee wherever you are
1-2PM: Live link up with events around the world