Despite your courage and sacrifice throughout COVID-19, council and school workers have been offered just 1.75%. But UNISON members have voted by 79% to reject such an unfair offer. UNISON will soon ballot members to see if they are willing to take industrial action, in an effort to improve the offer.

Care workers, refuse collectors, social workers, teaching assistants, street cleaners and so many more went above and beyond during the pandemic. You kept communities safe, cared for the most vulnerable, and ensured schools remained open throughout successive lockdowns.

You went out to work, so that others could stay home.

Despite this, you have been offered 1.75%. With inflation running at over 3%, this is a real terms pay cut. Plus the value of local government pay has fallen by 25% since 2010.

UNISON launched a consultation to ask members to vote whether to accept or reject the final pay offer, with 79% voting to reject – a resounding outcome, which indicates the strength of feeling amongst council and school workers.

On 1 October the committee that members elect to make key decisions on their behalf, decided that UNISON should move to ballot members to ask if you are willing to take industrial action in an effort to improve the offer and send a clear message – Council and school workers deserve a fair and proper pay rise

Members will start to receive ballot papers in November or early December,

In the meantime – UNISON and other unions representing Council workers and School support staff have written to employers – urging them to return to pay talks with an improved offer.

Details on the current offer

The pay offer falls far below what council and school workers need and deserve.

The final offer would provide: 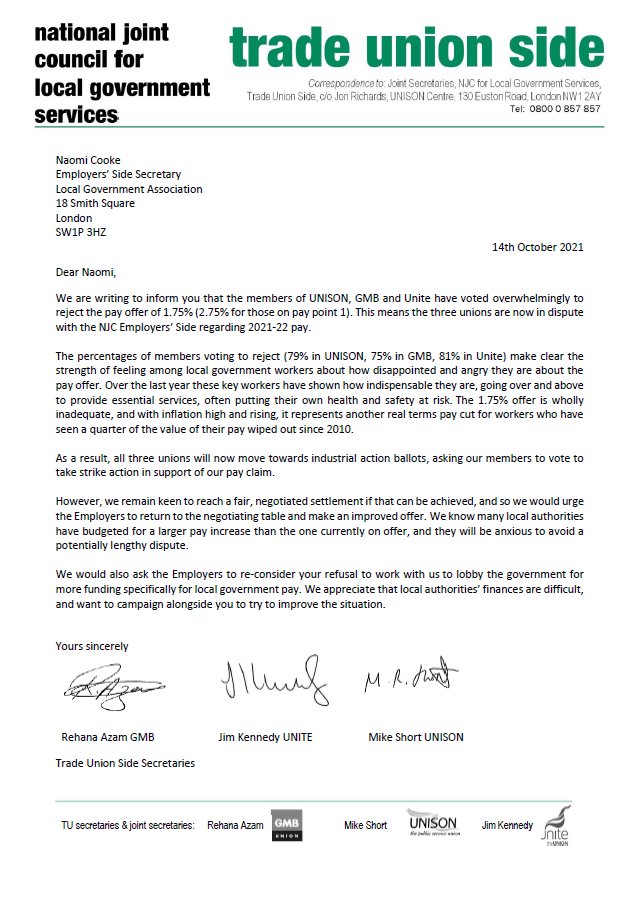